Top 5 RBs and Why

1. LT-#1 RB the past two years and a top 3 RB the past 7 years.
2. AP-A close second based on potential but injury concerns (missed 2 games last year) and a good back up in Chester Taylor move AP to second fiddle
3. Steven Jackson-Explosiveness and a healthy Bulger could mean big things for SJ
4. Joseph Addai-D Rhodes back in IND may take a little something off of Addai’s numbers but the rest may help him stay healthy. He stays at the #4 spot.
5. Brian Westbrook-Only thing holding him back is the injury question. He gets dinged up quite a bit.
Posted by Sam Hendricks at 6:28 AM No comments:

Fantasy Football Guidebook: Your Comprehensive Guide to Playing Fantasy Football is available in hardcover (ISBN 978-1-60264-022-1) and softcover (ISBN 978-1-60264-020-7) from Virtualbookworm.com, Amazon.com and Barnes and Noble (bn.com). More information can be found at the official websites, www.fantasyfootballguidebook.com and www.sam-hendricks.com.
Posted by Sam Hendricks at 5:26 AM No comments:

QUARTER BACKS
1) Tom Brady-He threw a bazillion TDs last year and that trend will continue. It does not take a rocket scientist to know that if you go 16-0 by having your QB score 52 TDs (50 passing, 2 Rushing) then nothing should change the following year. Sure, they lost Dante Stallworth and all 46 of his receptions (3 for TDs). Hmmm bet on 40 TDs or more.

5) Drew Brees-Strong finish (8 TDs and only 3 INTs the last four games) makes me think big things are in store for Brees who has averaged over 4400 yards the past two seasons at NO.

I know I said Top 5 but what if one of these guys gets hit by a Bud truck in the next few months. Call the next guy my spare for the Top 5.

6) Donovan McNabb-He is anywhere from fifth to tenth in most rankings. He had 12 TDs (only 5 INTs) the last half of the season and one of those games was MIA where he sprained an ankle and left before half time with two picks. Project 24 TDs 10 INTs and 4000 yards
Posted by Sam Hendricks at 11:42 AM 1 comment: 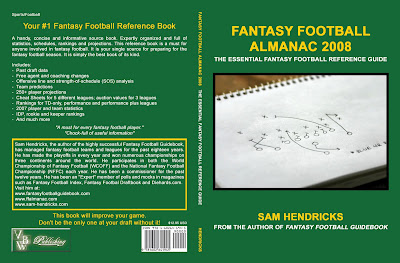 Look for Fantasy Football Almanac 2008 at virtualbookworm.com, Amazon.com and BN.com in the next week!

Perfect for the 2008 season with 2005-2008 draft information, NFL schedules, rankings and projections for over 250 players for the upcoming 2008 season.

Auction values, IDP rankings and 3 different type of league projections with Fantasy Points and tiers make this a must have edition for the 2008 season.
Posted by Sam Hendricks at 11:24 AM No comments: