Overall strong team and love the 8 WRs to try and find some sleepers. TE I need to hit on one of those two.

Fantasy Basketball Handbook: The Ultimate "How-to" Guide for Beginners and Experienced Players ($12.95) www.amazon.com/dp/
Posted by Sam Hendricks at 7:59 AM No comments:

Ask the Expert: Which one player do you believe will be on the most fantasy championship teams this season, and why?


Which one player do you believe will be on the most fantasy championship teams this season, and why?

C. J . Spiller. 1700 combined yards, 12 TDs and 60 receptions. In a PPR league that is 300 fantasy points and a championship... Buffalo plans to "give him the ball until he pukes". Now that's confidence. E. J. Manuel will start over Kolb and that should keep defenses a little unsettled. It will open up some lanes so that he can improve on his 6.0 YPC from 2012. Now if Spiller can only get some decent passes in the open field then he can work to improve on his dismal 10.7 yards per reception (kidding). The dual threat Spiller presents will be unleashed in 2013. 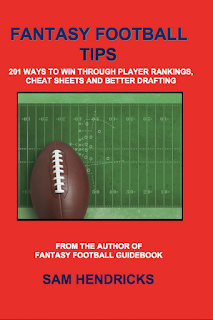 Fantasy Basketball Handbook: The Ultimate "How-to" Guide for Beginners and Experienced Players ($12.95) www.amazon.com/dp/
Posted by Sam Hendricks at 8:58 AM No comments:

3 Preseason Weeks in the books, so what do we know?


I have learned many things from my 13+drafts and 3 preseason games so far. In no particular order here they are:

-The QB position is deep. There are 15 QBs I would not mind having and that can be top 8 performers. After the top 5 on my rankings sheet (Brees, Rodgers, P Manning, Newton and Brady in that order) I really do not know who will be where but I would take any of them to start the season.

-The WR position is also deep. There are about 4 that are super studs (CJ, AJ Green, Marshall and Dez Bryant) and another 6-8 that are capable of putting up top 5 numbers. After that the next 20 are pretty good. And then there are some really nice sleepers in the WR 40-50 range. You can alternate RB and WR and have a very nice roster this year while waiting on QB and TE.

-There is only one TE worth drafting early-Jimmy Graham (PPR leagues). There are many TEs who are worth getting late.

-Owners still forget to boxout on the corners. Example A team 10 is on pick 5 of the draft. He is considering a RB or a WR. Both teams after him (11 and 12) have 3 RBs and 1 WR. What position should team 10 take? Assuming the players at RB and WR have the same value, team 10 should go WR since that is probably where teams 11 and 12 are going to go with most of their pick 5 and 6.

-Owners forget that there are NFL teams on byes in week 12 when SOME FF leagues have their playoffs. If your league rewards a first place regular season finish with enough compensation then losing C.J Spiller for the FF playoffs may be worth having him all regular season. If not then...buyer beware.

-Oak will have a different QB than last year and he may not be the highest paid QB on their roster.

-SD looks horrible and cannot keep a WR healthy. Ryan Mathews will see Danny Woodhead on the field more than himself due SD's passing from behind constantly. OAK is competing for the same title only with different problems.

-Ryan Williams may not make the AZ team. Ditto for Tim Tebow in NE.

-PIT, NO, CIN, DEN and CAR all may have RBBC. Rank them accordingly.

-Do not buy into the RBBC in MIA hype-Draft Lamar Miler for his speed and have Daniel Thomas on speed dial for waivers if needed or stash him if the roster is deep enough.

-The Jets QB position is ugly. BUF may be uglier for Week 1 with neither of their QBs healthy.

-Ronnie Hillman and Chris Johnson will run they ball for the respective teams from the 20 to the 20 and then Montee Ball or Shonn Greene will come in and goalline vulture the TDs.

-IND is suspposed to run more this year. If they do not find a healthy RB (Ahmad Bradshaw are you listening) then Luck may throw as much as last year.

-C. J Spiller is the real deal and should be drafted as a top 5 RB

-DET may surprise some this year. HOU will not-they are still a very good team.

Fantasy Basketball Handbook: The Ultimate "How-to" Guide for Beginners and Experienced Players ($12.95) www.amazon.com/dp/
Posted by Sam Hendricks at 7:30 AM No comments:

Sleepers and draft strategies I love this year


QB
E. J Manuel-BUF (this way before Kolb's concussion, now the cat is out of the bag)
Brandon Weeden-CLE

Strategies I favor
1) Either grab a Top 5 QB in the 3rd -5th rounds (Brees, Rodgers, Peyton Manning, Cam Newton or Tom Brady) and then avoid the position for the rest of the draft (assuming not in a start 2 QB league of course) or....wait on QB until everyone has gotten theirs and then wait some more

3) Wait on TEs. If you cannot get Jimmy Graham in the late 2nd round (PPR leagues, FFPC and FPC he goes in late 1st) then wait on TEs and take two TE12 or TE13 candidates.

4) Using the overall rankings list on the draft site that hosts your draft as the defacto ADP and making sure you do not pay too much for a player or wait too late to pick your sleeper.

Fantasy Basketball Handbook: The Ultimate "How-to" Guide for Beginners and Experienced Players ($12.95) www.amazon.com/dp/
Posted by Sam Hendricks at 8:00 AM No comments:

Greg Kellogg is a Fantasy Sports Writers Association (FSWA) Hall of Fame Member.
His show Kellogg's Komments airs every Tuesday from 7:30-9:00 and Saturday from 9-10pm.

We will discuss my books and the outlook for 2013-including possible sleepers at various positions.

Fantasy Basketball Handbook: The Ultimate "How-to" Guide for Beginners and Experienced Players ($12.95) www.amazon.com/dp/
Posted by Sam Hendricks at 7:49 AM No comments:

Time is running out to draft in the FootballGuys.com Players Championship (FPC)

Over $1.2 Million Dollars are waiting for the top fantasy owners playing in the Footballguys.com Players Championship this year, with a guaranteed grand prize of $250,000.00 - in fact, the entire prize structure is fully guaranteed!


But hurry because time is running out.
Leagues are open until 5 September


If you think about it this is pretty obvious but FF players forget it all the time. Your leagues ADP will he heavily influenced by the overall rankings used on the draft page by your league. If those rankings have Montee Ball at RB15 he will be drafted higher on average than other sites that use another provider where Ball is ranked RB25.

Even though some owners will ignore the rankings provided some will use them to varying degrees. Some may decide to use them as a "fail-safe" mechanism where they look at the overall rankings and pick players that have been at the top for what they feel is too long etc. In this manner they are in fact swayed by the rankings themselves.

Keep this in mind when you think about using the "default" rankings. Where did they come from and how are they affecting the average draft position for similar leagues this season.