Day 17 of the lockout

Will there be a football season in 2011? Don't expect anything until mid April at the earliest. Luckily there is opening day of Major League Baseball Thursday Tigers vs Yankees at 1 PM EST

I read a recent blog post by Ryan Houston at http://www.ryanhouston..com/ entitled "Fantasy Sports is played out".

I do not agree with all of his hypotheses but he does make some valid points about the pay to play fantasy sports contest model.

"Next thing you know – there is upwards of 15 companies now offering the same game. What did they do differently? Basically nothing. They added some “factors”, “bells & whistles” and “upgraded graphics.” They may have changed some game mechanics but basically they were all the same. So what happens? The guys that got out early are maintaining their market share despite the new entries into the space, so the rookies have to get desperate. So what do they do? Raise their prize payouts. So now you have 15+ companies all competing against each other for prize payout when the margins in this game are too slim to begin with. I’ve seen payouts as high as 94%. Listen to me — I don’t care what anyone says — you are NOT making any money on a 6% rake. You aren’t making any money on a 10% rake. You THINK you are — but you aren’t and you will not be successful long-term. You have to cover server costs, credit card processing fees, staffing fees. You are not going to win by offering the lowest “rake”. You simply can’t scale big enough. It will take MILLIONS of eyeballs and you can’t get there."

What can fantasy players get out of this message?

Watch the payouts and the companies paying them. We in the fantasy football community have been hurt in recent years by several companies who went belly up and failed to pay winners.

You owe it to yourself to do due diligence before investing hard earned dollars in any contest big or small.

Who gets to fight the Madden curse as the Madden Cover Player for 2012?

No it is not as simple as that.

To quote ESPN itself...Football fans may not have any control over the labor situation, but for the first time, they can pick who is on the cover of the "Madden" game series.

EA Sports' "Madden NFL 2012" cover will be decided bracket-style, with fan voting on SportsNation, with rounds beginning today and the contest wrapping up on April 26. On Monday, the Philadelphia Eagles' Michael Vick and Cleveland Browns' Peyton Hillis visited ESPN to talk about the contest.

Vote now! And keep your fingers crossed if you draft him.

Did I just hear Peyton Hillis correctly on NFL Live? NFL fans "uneducated" about the issues?

I hope I am wrong but it sounded to me as if Peyton Hillis just said the average
NFL fan was "Uneducated" about the players isues?

Wow! I usually do not react to these things, but I think Peyton is way off base here.

I think many fans know exactly what is going on. Both sides are fighting for money.
The players want some other considerations which the owners have agreed on.
It all comes down to money and splitting the 9 Billion a year.
The owners want to take some off the top for expenses and the players want
proof of these expenses.

It is hard to really feel too sorry for either side when there is so much money
on the tabe and the average fan is just glad to have a job!!!!!

As far as the issues and which side is "right". There is an old saying...
There are 3 sides to every story-your side, their side and the truth.

Screw the NFL and the NFLPA. I am going to start thinking about the 2011 NFL season.

WR
1. Roddy White, ATL-Always underestimated
2. Andre Johnson, HOU-The passing game may have it a little easier now that Mr Foster has shown his worth.
3, Reggie Wayne, IND-very reliable, getting a little old in the tooth but Peyton loves him so expect 1200 +10 TDs
4. Calvin Johnson, DET-eventually he has to deliver right?
5. Greg Jennings, GB-until someone does it better he gets #5
6. Miles Austin, DAL- A little risk reward here with Romo returning from injury
7. Larry Fitzgerald, AZ-My have the times changed. Give this man a QB please!
8. DeSean Jackson, PHI-Exciting. Give him a bump up if Vick goes down and whats his name comes in.
9. Wes Welker, NE-PPR baby!
10. Mike Wallace, PIT-With Big Ben playing the entire year expect big things from Wallace.
Fantasy Football Tips: 201 Ways to Win through Player Rankings, Cheat Sheets and Better Drafting ($10.95) www.amazon.com/dp/0982428669 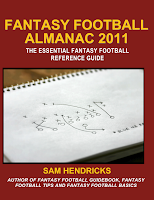 I am confident that the NFL and NFLPA will come to a reasonable resolution of this most disagreeable dispute.

I am quoted in several media outlets in predicting a 22-23 April agreement. This would make the 2011 season begin in earnest a week before the NFL Draft.

Let's hope this is true. Even if it is not so, the Fantasy Football Almanac will be available shortly after the NFL draft as usual. It will be delayed for 2 weeks (release is scheduled for 15 May vice 1 May) due to anticipation of a "catching up" phase after the lockout is resolved.

So as you can see much of the information will not change even if the off-season is delayed.
Free agent signings and depth charts will need to be updated.

I for one hope this is resolved sooner rather than later.

QB
1. Michael Vick-PHI (love him or hate him, when healthy he is the best QB due to his foot work)
2 Peyton Manning-IND (gets the nod above young Aaron simply bc of SB hangover for GB)
3 Aaron Rodgers-GB
4 Drew Brees-NO if he gets any stability at RB, WR and TE he could be dangerous again
5 Tony Romo-DAL imagine a Romo without injury or intrigue
6 Philip Rivers-SD Depends on VJax?
7 Tom Brady-NE Always Seems to be in top 5
8 Matt Schaub-HOU Sleeper
9 Josh Freeman-TB Anytime your team throws all the time, your QB will have top numbers
10 Ben Rothlisberger-PIT 4 more games in 2011 maybe

Some of the best news these days in terms of fantasy football recently came out.
The National Fantasy Football Championship (NFFC) will continue under the new ownership of Greg Ambrosius.

So what happened? In a nut shell NFFC was bought awhile back by Liberty Sports Interactive. Run under the name Fanball, they decided not to continue the NFCs in 2011. Greg Ambrosius the mastermind behind NFFC (and NFBC for Baseball, http://www.nfbc.stats.com/) took matters in his own hand and bought the NFFC and NFBC back from them. He has now teamed up with his long-time partner in FF Tom Kessenich to provide the NFFC, NFBC and the future NFBBC (Fantasy Basketball). And STATS has been brought in to run the backend software for the leagues. STATS ran it for the first six years. STATS may have an ownership stake in the NFFC as well I know Greg and Tom are now with STATS in some capacity. But Greg, Tom and STATS make a good team.

Greg and Tom are good people and STATS seemed to me to be better organized then the software Liberty used last year.

So great to hear that NFFC is alive and well and I wish them all the luck this season.
NFFC is mentioned prominently in Fantasy Football Guidebook and Fantasy Football Tips while NFBC is almost exclusively mentioned in Fantasy Baseball for Beginners.
Greg and Tom are good stewards of the fantasy game.
Greg is a recent inductee into the Fantasy Sports Writers Association (FSWA-of which I am a member) Hall of Fame